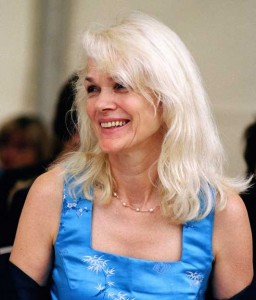 Hannah Nydahl (1946-2007) together with her husband Ole became the first Western students of H.H. the 16th Karmapa in December of 1969. As well as being a qualified Buddhist teacher in her own right, for over 30 years, Hannah interpreted for the highest Karma Kagyu teachers such as the 16th Karmapa, Lopon Tsechu Rinpoche and Kalu Rinpoche, and translated texts of Tibetan Buddhist philosophy.

After six months of fighting cancer, Hannah passed away on April 1, 2007 in Copenhagen, Denmark at the age of 60. She was deeply respected for her work, devotion and accomplishments as a Buddhist practitioner. A Danish newspaper even referred to her as the “Mother of Buddhism”.

Below is a trailer for a documentary film being made about Hannah Nydahl’s life.