Diamond Way Buddhism in Manchester
Our Buddhist Group was established in 2006. In 2010 we moved location to a beautifully converted industrial building in the centre of Manchester where the group meets for public meditation classes three times a week. These are suitable for both newcomers to meditation and the more experienced Diamond Way Buddhist practioner. Every Wednesday there is an introduction which gives new people an overview of Diamond Way Buddhism and our significance in the overall Buddhist tradition, particularly in the modern West. 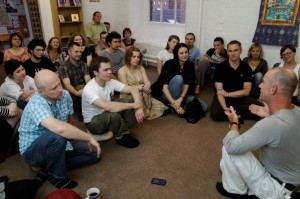 Buddhist Lecture with the Manchester Group

There is then a brief explanation on how to meditate prior the main focus of the evening which is a guided meditation on the 16th Karmapa. We have a small library with Buddhist books and magazines that are available for group members. There are regular courses on Buddhism and Buddhist meditation, guided by experienced practitioners or travelling teachers who have been appointed by Lama Ole Nydahl. All weekly Buddhist meditation classes at the Manchester centre are free of charge.