These are the very traditional meditation practices used in Diamond Way Buddhist Centres, together with references to their Tibetan Sources. 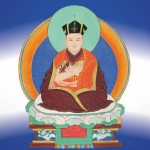 This form of ‘Meditation on the Lama’ (Skt. Guru Yoga, Tib. Lami Naljor) is a practical and comprehensive tool for enlightenment which was composed the 16th Karmapa Rangjung Rigpe Dorje. The 16th Karmapa made Hannah and Lama Ole Nydahl the holders of this practice, with the wish that it is always keep fresh and on the cutting edge of western minds. The emphasis is on actively continuing the pure view, obtained in meditation, into daily life. It is the basic practice of Diamond Way Buddhism. Click here for an interview with Lama Ole Nydahl on the 16th Karmapa Meditation.

The Four Foundational Practices (Tib. Ngöndro) are also known as the preliminary practices of the Great Seal (Skt. Mahamudra) as they lay the basis for realising the true nature of mind. Involving many repetitions, they create strong positive imprints, making one unshakeable. They may take several years to complete. They are a translation of a meditation text known as ‘The Vehicle for the Path of the Supreme’, composed by the Ninth Karmapa, Wangchuk Dorje (1555-1603), taken from his ‘Great Treatise of the Instructions of the Great Seal’. The four practices are: (1) Taking Refuge and Developing the Enlightened Attitude; (2) Diamond Mind Meditation (Skt. Vajrasattva; Tib. Dorje Sempa); (3) Mandala Offerings; and (4) Meditation on the Lama. Read more about the Four Foundational Practices here. 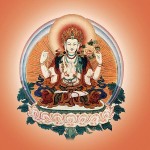 No character trait is finer than compassion, and the Buddha was very conscious of this. He frequently advised people to specifically develop this quality. The different forms of Loving Eyes (Skt. Avalokiteshvara, Tib. Chenrezig) manifest to help beings everywhere and represent the widest expression of kindness on the beyond-personal level. This meditation text was composed by the 12th Century Siddha Thangtong Gyalpo “King of a Thousand Valleys” (1361-1485). It is practiced according to the instruction given to Hannah and Lama Ole Nydahl by Kalu Rinpoche in Sonada in 1970. 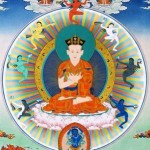 This is a ‘Meditation on the Lama’ also known as ‘The Guru Yoga in Four Sessions’ (Tib. Tun Shi Lame Naljor). The practice is one of the main devotional practices of the Karma Kagyu Lineage and was composed by the Eighth Karmapa Mikyö Dorje (1507–1554). It is used after having completed the Four Foundational Practices. 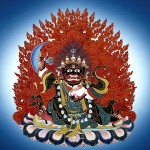 This short invokation of the central protector of the Karma Kagyu school, Black Coat (Skt. Mahakala; Tib. Bernagchen), is a sung meditation. This particular text was composed by the Eighth Karmapa Mikyö Dorje (1507–1554). It is a daily practice and is sung in Tibetan after public meditation sessions. Black Coat embodies the love and protective activity of unlimited space. Whoever recites the text daily will become fearless. 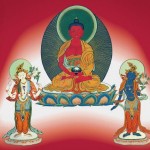 Phowa is a meditation in which one learns to send one’s consciousness into the heart of The Buddha of Limitless Light (Skt. Amitabha) as a preparation for one’s own death. Lama Ole Nydahl teaches this many times around the world each year. The Phowa transmission which Lama Ole Nydahl teaches originates in the Longchen Nyingthig tradition of the Nyingma school of Tibetan Buddhism which contains the deepest teachings of the Great Perfection (Dzogchen). During the great “Dolma Naljorma” initiations in Rumtek in the year 1971 the 16th Karmapa brought together Hannah and Ole Nydahl and the Drikung Kagyu Lama, Ayang Tulku, a holder of the Phowa practice. Tenga Rinpoche and Dilgo Khyentse Rinpoche gave Lama Ole additional Phowa transmissions. In 1987 Shamar Rinpoche authorised Lama Ole to teach Phowa.